Announcing our book club with Laura Paull. We will be reading Riot Days by Maria Alyokhina.

Watch on YouTube |  Listen on Apple Podcasts| Listen on Spotify

Trailer on YouTube. Find it on Amazon. Description from Goodreads.

A Pussy Rioter’s riveting, hallucinatory account of her years in Russia’s criminal system and of finding power in the most powerless of situations

In February 2012, after smuggling an electric guitar into Moscow’s iconic central cathedral, Maria Alyokhina and other members of the radical collective Pussy Riot performed a provocative “Punk Prayer,” taking on the Orthodox church and its support for Vladimir Putin’s authoritarian regime.

For this, they were charged with “organized hooliganism” and were tried while confined in a cage and guarded by Rottweilers. That trial and Alyokhina’s subsequent imprisonment became an international cause. For Alyokhina, her two-year sentence launched a bitter struggle against the Russian prison system and an iron-willed refusal to be deprived of her humanity. Teeming with protests and police, witnesses and cellmates, informers and interrogators, Riot Days gives voice to Alyokhina’s insistence on the right to say no, whether to a prison guard or to the president. Ultimately, this insistence delivers unprecedented victories for prisoners’ rights.

Evocative, wry, laser-sharp, and laconically funny, Alyokhina’s account is studded with song lyrics, legal transcripts, and excerpts from her jail diary–dispatches from a young woman who has faced tyranny and returned with the proof that against all odds even one person can force its retreat.

On the first part of my conversation with English Professor Karen J. Cunningham, she tells me about her early interests in books about horses and sulky racing. Books she read in her free time as a kid like Nancy Drew as well as books in her adulthood such as Michael Connelly’s character Heironymus Bosch. She tells me about her affection for Southern California and what she finds profound about it. Her childhood moving around Southern California and Astoria, Oregon. Undergraduate life in Sacramento and living in San Francisco. Stories about her motorcycle riding, cable car driving husband. Her professional career at Pacific Bell in a sink-or-swim program managing circuit provisioning. Other jobs teaching English to Japanese business people and library assistant. The epiphany to enroll in graduate school. Learning from her life the capacity to manage obstacles. She recalls job discrimination at Pac Bell. Enduring sexism as one of the few women at her company. The short term and long term consequences of taking action. Our bewilderment on Harvey Weinstein and the culture that allows his behavior to persist. The public obligation to prevent future injustices by taking action.

In part two, we discuss her professional career interest in law and violence in the plays of William Shakespeare. Her research into the theatricality of public executions. Description of the Greek & Roman execution known as the Brazen Bull. The political staging of executions. Theatrical nature of execution by quartering in Renaissance England. The political climate of Shakespeare’s time. Cultural implications of the law through the eyes of an artist such as Shakespeare. How the theory of cultural anthropologist Clifford Gertz is applicable to interpretation of constitutional law. Her other Shakespeare interest: gender. She examines the play Measure for Measure. The magic of writers who seem to transcend time. How over the centuries humanity has recurring issues because we cannot solve the complexity of them absolutely. Finally, the art she adores, such as painter Edward Hooper (e.g. Nighthawk, Early Sunday Morning, Railroad Sunset, Seven A.M.), Mark Rothko and the sculpture of David by Michelangelo. Find out more about her on Department of English, UCLA or by her Curriculum Vitae. 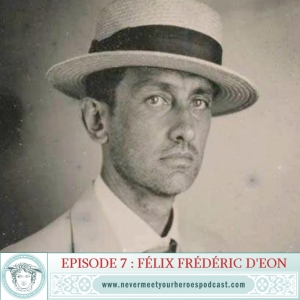 I talk to Félix Frédéric d’Eon who updates us on his life in Mexico City. How his visits with his mom to the Huntington Library made an impression on his art. His queer revision of Edwardian and Art Nouveau styles. How the Internet sales on Etsy and Ebay supports his ability to sustain his artwork. The discipline of producing art and self-promotion on Instagram and social media. The uncensored glimpse into his soirees on Snapchat. His artistic process and we discuss the work Tattoo Lovers. I fanboy on his art Amour Nouveau and Amor Picante. Is Felix a nudist? We talk about Mae West and The Wedding of Gladys Bentley. He explains how the installation art of Félix González-Torres translates into his work. His early career as a male figure model. We geek out on the art of Michelangelo. We talk about the September 19th earthquake in Mexico City. What does it mean to be Chicano? How his work is inclusive to marginalized queer people. His outreach and research to appropriately incorporate other spheres of queer erotica into this art. Why he continues to make Pop art that is accessible and affordable. Find is work at felixdeon.com, Etsy, Ebay, Facebook, Twitter, Instagram.

Ashley Bartlett gets into how she started writing Les Fic. Her childhood surrounded by fabulous queer people in suburban Northern California. Our experiences at UCLA. The domestic bliss of being married. Learn about “lovebians.” Meeting her hero, her publishers Bold Strokes Books and getting into editing. The biphobic schism in lesbian fiction. Reading the reviews of her novels. She talks about her Dirty Trilogy. The moral ambiguity of the character, Cash Braddock, in her newest trilogy. The question: “Are straight people okay?” (e.g. Kim Davis, high school homecoming queens and their value judging mothers). Contemporary high school coming out and gender expression. The transphobic politics of Ally McBeal. Reading Kim Harrison novels. We pontificate on sexual harassment, #balancetonporc and Audre Lorde. Find out more about her on www.ashbartlett.com. Facebook. Twitter. 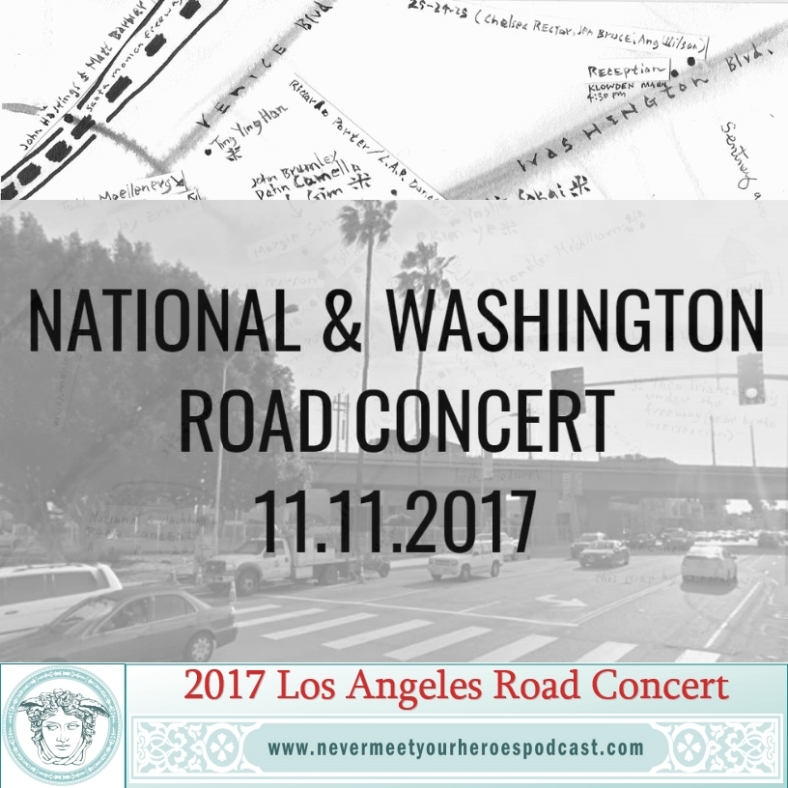 The Los Angeles Road Concerts took place Saturday, November 11, 2017 on National and Washington in Culver City. For this Road Concert, I spoke briefly with 8 artists about their work. For more information on their project check out laroadconcerts.com. 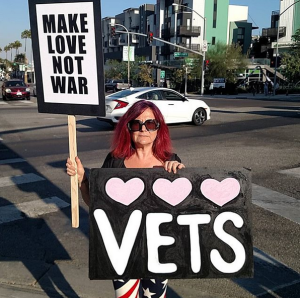 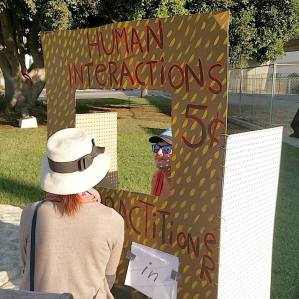 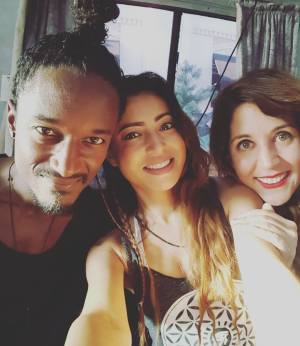 Stephen Van Dyck talks about his early life in New Mexico, childhood fascination with mapping cities, his early interest in writing and piano, his teenage years in a band and meeting men online, we discuss the ontology of happiness, LA Road Concerts and the urban sprawl of Los Angeles, his forthcoming book People I’ve Met from the Internet, dating before Grindr, recollections of North Carolina and our symposium on Tori Amos, Shirley Manson, Bridget Bardot and Eurythmics. Find out more about this LA Road Concerts http://laroadconcerts.com.

Ian MacKinnon talks to me about what lead him to Los Angeles, discovering performance art and the influence of mentor Tim Miller, the gay liberation, the performance space Highways in Santa Monica, his fetish for gay history, Karl Heinrich Ulrichs and Edward Carpenter, Akbar and the gentrification of Silver Lake, his collaborators Travis Wood, David LeBarron, Steven Reigns and Robert Patrick, also, his current inspirations Martin Matamoros, Kaitlyn Aurelia Smith and more. Find out about Planet Queer in Los Angeles at www.planetqueer.org. 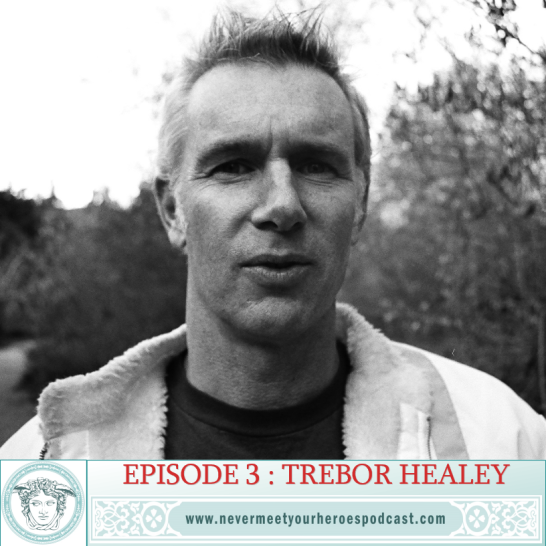 In this conversation with Trebor Healey, he recalls his days in the San Francisco poetry scene, coming to Los Angeles to work on writing fiction, his affinity for fauns and Pan, the Radical Faeries, Catholicism, his mentors Mark Thompson and Felice Picano, how to write your real life into fictional characters, traveling in South America, our rants about Argentina, safe sex, the Los Angeles Public Library, and my rambling about director James Whale. Find more about Trebor at www.treborhealey.com.

Listen on Apple Podcasts |Listen on Spotify| Listen on YouTube

Trebor Healey is the recipient of a Lambda Literary award, two Publishing Triangle awards and a Violet Quill award. He is the author of three novels, A Horse Named Sorrow, Faun, Through It Came Bright Colors, a poetry collection, Sweet Son of Pan, and two collections of short stories, A Perfect Scar & Other Stories and Eros & Dust. He co-edited (with Marci Blackman) Beyond Definition: New Writing from Gay and Lesbian San Francisco and co-edited (with Amie M. Evans) Queer & Catholic.

Meet artist Angel Villanueva who discusses his early life in Baja California, his career as a painter and photographer, being an educator, fascination with paintings, science fiction films and more. Find his work at www.angelvillanueva.com.

Meet artist Raul Pizarro who discusses his life, paintings, sculptures and muses on how they influenced his artwork. Find his art at www.raulpizarro.com.